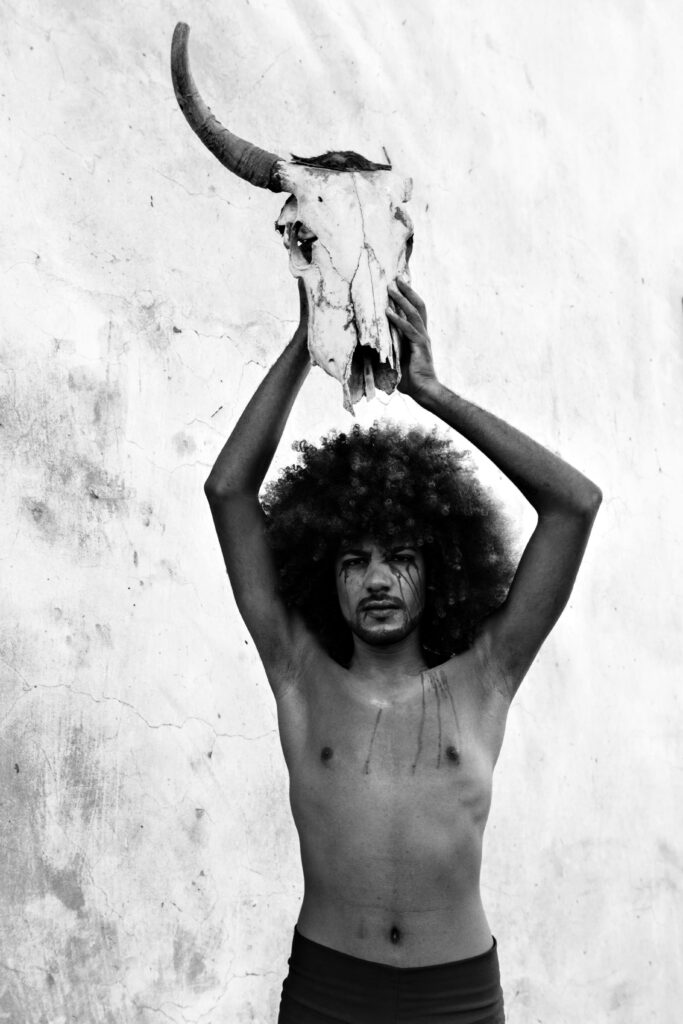 As the bull-man arched his body into the lunge Will knew would kill him, another sound suddenly entered the fray—a demented groan. The bull-man stopped his attack to see was causing the noise. As he turned around, Will witnessed two horns penetrate all the way through the bull-man’s torso. His body stood tall for a moment, then it went limp and flopped to the ground.

Will shone his torch behind the dead body to get a look at the bull-man’s attacker. Staring back at him was the three-legged bull. It was hovering in pain on its semi-functional legs, its nostrils flaring, its eyes flickering.

Will looked the beast in the eye. He may have imagined it, but the bull appeared to nod at him through its pain. Then its legs wobbled, and it collapsed on top of the bull-man’s lifeless body. It continued to take a few more labored breaths before it exhaled deeply and passed away.

Will sat motionless amidst the bloody battlefield, unsure whether he’d survived or not. Eventually, the putrid rotting smell reminded him that he was alive, and he dragged himself back to his feet. He checked the shed for signs of life, but all that was left was death. Even the invisible cattle had disappeared into the night.

He followed his own footsteps in the grass home, but there were no cattle hoof tracks to be found nearby. There were no signs of cattle anywhere. When Will arrived back home he collapsed in bed next to Wendy and fell into a deep sleep.

Wendy shook Will awake the next morning.

Will opened his eyes, and took a few moments to recalibrate. “Was I saying something?” he asked.

“Yes, you were shouting something about a bull charging at you,” Wendy replied. “What happened last night?”

“Oh my god, we need to call the police right now,” Will stated. “It’s carnage at the vineyard.”

“Stieg’s dead,” Will responded. “He’s been torturing and murdering cattle for his own twisted purposes. Last night, one of them reciprocated.”

As Wendy digested the awful truth, Will was already on the phone to the police.

“Hi, Will Watson here on Bald Knob Rd,” he stated. “You need to get to the vineyard right away. Stieg Bitchman was killed last night.”

When he hung up, he said to Wendy, “We should drive around there right away so I can talk the police through what happened. Otherwise, they’re in for a world of confusion.”

As they drove up the vineyard’s driveway, Will and Wendy noticed a group of police vehicles were already clustered around the homestead.

“They must have got wind of it earlier,” Wendy replied

Will parked their car alongside the police vehicles, and they wandered over to a policewoman standing next to one of the cars.

“Best you stand back,” she said as they approached.

“But I was here last night,” Will replied. “I can fill you in on all the gory details.”

“I assume that’s why you’re here, to investigate Stieg’s death?” Will asked.

“No. We’re here to arrest Mr Bitchman for illegally stealing cattle and for breaking animal cruelty laws,” she stated. “He’s being arrested inside as we speak.”

“What?” Will exclaimed. “But I saw him being gouged to death by a bull last night.”

“I assure you he’s very much alive,” the policewoman stated. “But his days as a free man are over. He’s facing a long jail time.”

Will stood motionless and perplexed.

“Did you happen to investigate whether he’s also been grazing his neighbors’ grass by any chance?” Will asked.

“There’s no record of that, I’m afraid,” the police officer responded. “Most of the stolen cattle were quickly dispatched in the most brutal of ways.”

“Do you know why, officer?” Will asked. “He clearly didn’t intend to use the meat.”

“Between you and me, we believe he wanted to use their body parts like a grotesque puppeteer,” she replied.

As they spoke, the homestead’s front door was thrust open and two police officers escorted a handcuffed Stieg Bitchman down the front stairs. He was wearing a tea-stained singlet and shorts, and was drenched with sweat. They walked him over to a police car near to where Will and Wendy were standing.

As Stieg was being guided into the car, he noticed Will and Wendy. He turned to Will and said, “Did you have another nightmare last night, Watson?” And then he let out a vicious high-pitched laugh which broadcast to all that he thought he’d won whatever game he was playing.

“Let’s go, honey,” Will said. “The neighbors around here are a real piece of work.”