After dinner that evening, Will prepared to head off to the back paddock again. This time, he was armed with a pair of binoculars, a torch, an iphone, and a gong. The iphone’s flash wasn’t strong enough to light up a field full of cattle, but he’d be able to use it to video anyone tampering with their fence.

“The only thing you’re missing is black face paint underneath your eyes,” Wendy stated.

“In case I’m chased by any more rogue bulls. I want to be just as scary as they are,” Will explained. 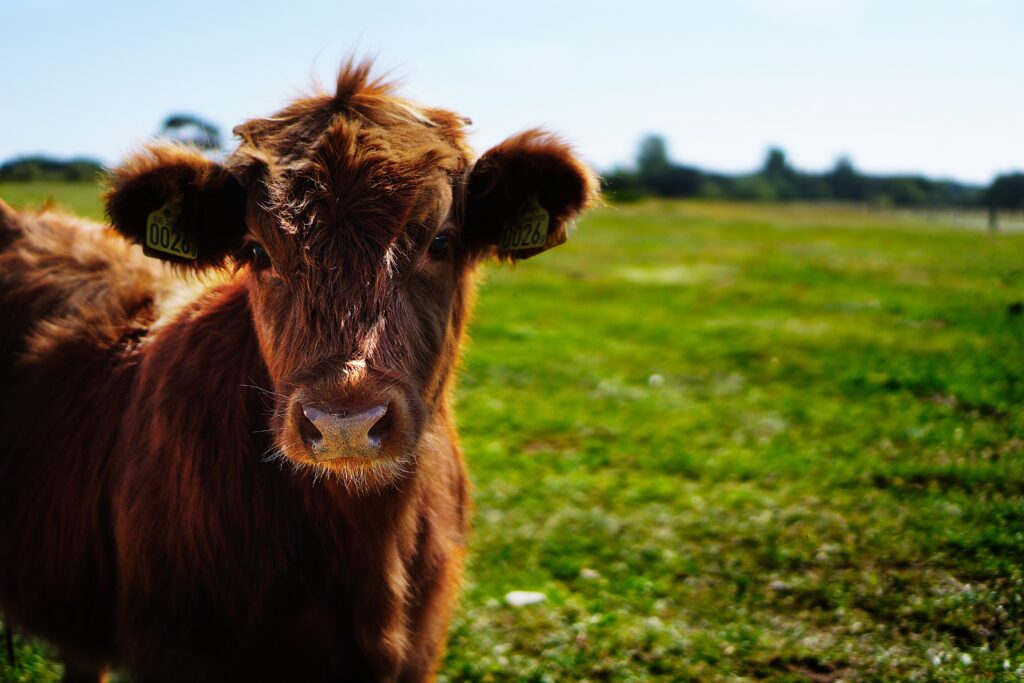 “If they’re meeting you when you’re cold and tired, you’re already scary enough,” Wendy said as put her arms around Will.

When Will arrived in the paddock, there were no cattle in sight. It was a clear night with a new-moon providing a soft glow across the field. A bird sang a lonely song nearby which reminded Will of a Christmas hymn. He sat down and let the bird entertain him. It was strangely therapeutic, and time became elastic while the bird cast its magic. Will relaxed and lay back on the grass, gazing up at the sky full of stars above. He lay like that for hours. Before he knew it, he drifted off to sleep.

Suddenly, Will was awoken by some cattle mooing nearby, so close that it sounded like the mooing was coming from inside his own head. He sat up driven by fear. With the help of the light beaming outward from their back verandah, he could see the silhouette of cattle grazing all around him. One cow nearly stood on his hand as it walked up the hill. Will checked for bulls, but he couldn’t see any. Realizing he wasn’t in immediate danger, he turned his torch on and wandered across the paddock to the fence bordering the vineyard. He held his torch high as he searched for evidence of where the fence had been tampered with.

As Will walked along the fence line, he suddenly felt like he was being watched. He turned his torch off and peered up the hill toward the vineyard. It appeared as white as a moonlit sail. He sensed movement, so he held the binoculars up to his face for a clearer view. Within seconds, he’d focused in on whatever was moving. It was located on the homestead’s front veranda. But what was it? Will furthered sharpened the binoculars’ focus and was able to see two long horns lit up by Stieg’s security lights. The horns were motionless and facing him as though their owner was staring directly at him. However, the horns abruptly turned and retreated into the darkness.

Will wandered back home with a chill in his heart.

Wendy shook Will awake the next morning.

“Wake up, Sleepyhead!” she said. “It’s almost eight o’clock. You slept in. I’m about to drive to the pharmacy. You coming?”

“I guess so,” Will said as he dragged his tired body out of bed.

Wendy started the car up, and Will joined her a few minutes later.

“Are you alright?” Wendy asked as she reversed out of their garage.

“I don’t know,” Will replied. “Last night was… inexplicable.”

“What happened? Did you see Stieg letting his cattle in?” Wendy asked.

“No. I feel sleep and awoke to find the cattle grazing our field,” Will responded.

“Easy, tiger,” Will replied. “I’m the one putting my ass on the line here.”

“You’re right, sorry,” Wendy said. “So what was so scary if you feel asleep? Did you have a nightmare?”

“Oh, you’re on fire today,” Will said with a chuckle. “No, it’s just it looked like a bull was wandering around Stieg’s veranda in the middle of the night.”

“I thought his homestead was fenced off from the paddocks,” Wendy stated.

“Hold that thought,” Wendy said as she pulled the car into the pharmacy carpark. “I’ll just grab our evidence, and we can put this horrid affair behind us.”

“Right you are,” responded Will as he closed his eyes for a moment of rest.

Wendy jogged back to the car a few minutes later, photos in hand.

“Nat said Stieg popped into the pharmacy yesterday to pick up some local anaesthetic,” Wendy explained.

“So he’s injured?” asked Will.

“Sounds like it. Let’s check these out at home in case he comes back,” Wendy said as she reversed the car out of the carpark.

When they arrived home, Will and Wendy charged inside. Wendy ripped open the envelope containing the photographs. She shuffled through the photos like a well-worn pack of cards until she located the one she was looking for.

Will stepped forward for a closer view.

“What the?” he said as he perused the photo. “Where are the goddamn cattle?”

“Maybe you photographed the wrong angle?” Wendy asked. “All we can see here is your flash lighting up an empty paddock.”

“It doesn’t make any sense,” Will said. “I pointed Old Bertha directly at the cattle for god’s sake.”

“Maybe you were sleepy again,” Wendy stated. “It’s not your fault, honey. As you said, you’re the one putting your body on the line.”

“So what next?” Will asked, trying to remain calm.

“Well, without evidence we haven’t got a leg to stand on,” Wendy said. “Maybe it’s my turn to enter the battlefield. I’ll set up camp in the paddock tonight.”

“No way,” Will interjected. “You’re pregnant and this is a high risk mission. I’ll head out again and this time I’ll get the winning shot.”

That night, Will packed a backpack before he left containing Old Bertha, his iphone, two torches, water, a flare gun, and a large flask of hot coffee.

“Safe is my middle name,” Will replied with a smile.

“Says the man who chopped off one of his own toes when he was chopping wood as a teenager,” Wendy said.

“Ah yes, toegate. Thanks for reminding me. Night night, honey,” Will said as he pretended to hobble off, inspiring a sympathy chuckle from Wendy.

Will made his way to the back paddock with the backpack on his back. When he arrived, it was darker and colder than he’d expected. The new moon was obscured by heavy cloud cover. He sat down in the middle of the paddock and crossed his arms in an effort to warm himself up. He mentally kicked himself for not wearing more clothes on such a chilly night. But then he remembered the hot coffee in his backpack, and served himself a cup. As he sipped the coffee, he warmed up on the inside. As he did, his night vision gradually started working. The back paddock was empty, while the trees lining the bottom of the back paddock were blowing in the wind. Beyond the gentle rustling of the leaves in the trees, it was close to silent. The friendly night bird who’d sung for him last time wasn’t providing the same welcome respite from the dark quiet.

With the caffeine coursing through his veins, Will was awake and alert. Old Bertha hung around his neck while he held his iphone in one hand and his torch in the other. However, there were no cattle in their paddock or anywhere in sight. Maybe Stieg knew he was watching. There was something not right about his neighbour—he knew it.

A couple of hours and two more cups of coffee later, Will thought he heard something. He stood up, turned his torch on, and searched the paddock for cattle. However, there were none to be found. But there it was again—it sounded like the distant echo of a cow mooing from the vineyard’s hill. And it wasn’t just any moo, it was a distraught, unhappy cry for help. And there it was again, and again. He turned his torch off to allow his night vision to reveal any distant moving shapes which could be cattle. There were none to be seen. But the mooing was becoming louder and closer. And it sounded like more cattle were joining in, many more. Will could have been imagining it, but it sounded as though a vast herd of cattle was charging down the vineyard’s hill toward the back paddock, toward him. He turned his torch back on, but they remained out of sight. Will was perplexed. He could feel the rumble of their hooves hitting the ground which meant they were getting nearer. He pulled out his flare gun without a plan at the ready. All he knew was he didn’t want to be trampled to death.

The ground shook as the cattle charged toward Will like obese lemmings running toward an invisible cliff. It sounded like they were only yards away, but he still couldn’t see them. Perplexed, he decided to trust his ears rather than his eyes. So he started running up the hill toward the boundary fence in an attempt to escape. As he ran up the hill, the sound of a bull grunting its displeasure at his plan could be heard only inches from his butt. He knew he was too far away from the fence to escape whatever was coming, so he prepared for the inevitable pain in the ass.

Will was in luck. At the last moment, the bull swerved around him before running on ahead. But that meant Will was cornered. He was surrounded by cattle in all directions. So he stopped running and stood his ground. However, the cattle didn’t follow his lead. They were no longer running toward Will, but they were charging around him, faster than ever. At least a hundred cows and bulls could be heard gallivanting around him in a manic circle. Will stood still as he tried to compute what was happening.

Suddenly, the cattle stopped running and slowed to a controlled march—away from him. He breathed a sigh of relief. He didn’t bother turning on his torch as he knew his eyes would once again deceive him. But he could hear the cattle trudging across the paddock toward the boundary fence.

Will took a few steps toward the relative safety of home before he stopped in his tracks. If he went home now, all he’d have were more questions. Why couldn’t he see the cattle? Why were they playing with him? Was he a sandwich short of a picnic? No, he couldn’t face Wendy in the morning with so many unresolved questions hanging over them. She was pregnant and deserved to feel safe in her home. So did their unborn child. With Wendy’s face in his mind, he did an about-face and followed the retreating cattle across the paddock. Did he know what he was doing? No. But he was determined to return home with answers.