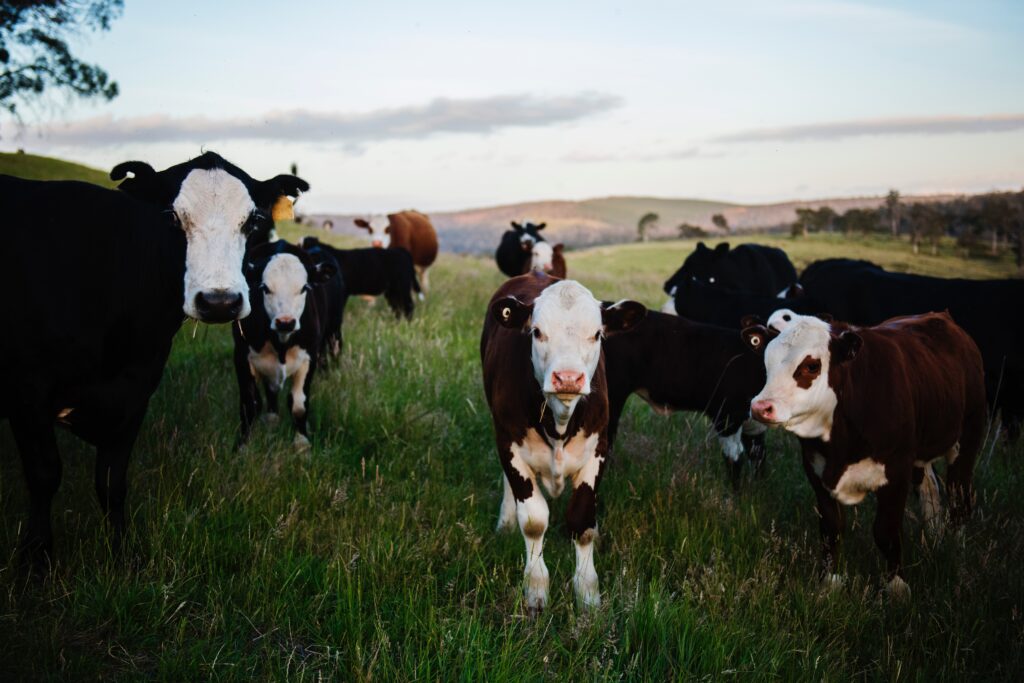 The cattle thumped their hooves on the ground in time with one another, almost as if they were marching in a preordained line. Will ran to catch up with them and slowed down when he reached the back of the queue.

The cattle approached the boundary fence and marched through to the other side, despite no gate or opening being apparent. Will was already beyond confused by their invisibility, so he didn’t dwell on the lack of visual confirmation of what his ears were telling him. He held up a wire in the fence and squeezed through to the other side, before he resumed his place at the end of the line. The cattle were climbing the hill toward the vineyard. They seemed to know exactly where they were going.

As Will followed, he found himself involuntarily placing his feet down in time with the cattle’s hooves. And within seconds, he was marching in formation with the rest of the bovine platoon. The sounds of their hooves and his feet hitting the ground was strangely hypnotic. He almost forgot he was human as they approached the vineyard’s homestead. Then he remembered Stieg Bitchman lived inside, and he was trespassing—that he was indeed human. But he noticed a feeling inside that he wasn’t used to when faced with high-risk situations like this: relaxation. Inexplicably, Will felt relaxed as he marched behind a line of invisible cattle toward the home of the scariest man he’d ever met. Either he was changing or this was a most unusual night.

When the cattle were only a few yards away from the homestead’s front veranda, they suddenly veered right. They marched alongside the homestead’s frontage and turned left around the side. They continued to march with purpose, so Will continued to follow with uncertain intent. Once they’d passed by the side of the homestead, they continued forward in a straight line. Will noticed they were approaching the silhouette of a large outbuilding up ahead. There were noises coming from within the shed, ugly cries of pain being broadcast to all who’d listen. But Will reminded himself he was in a state of confusion, so maybe he was also confused about the strange cries.

The cattle sped up as they approached the shed, and were soon marching inside. Of course, Will couldn’t walk through closed doors like they could, so he had to contend with the front door. It appeared to be closed and locked from the other side, but it creaked open when Will pushed it. He could no longer hear the cattle marching, but the occasional moo suggested they were congregated inside. As Will stepped inside, a godawful smell within the shed hijacked his senses. It smelt of rotting meat which had been left out in the sun for months on end. He held his nose to keep the smell out of his being.

Will had become so used to walking in the dark that he’d momentarily forgotten he was holding a torch in his hand. He turned it on and peered around the shed.

He jumped back in horror! He wasn’t mentally prepared for what lay before him. There were piles of body parts from deceased cattle lying in piles of gory mess all around the shed. The meat, blood, and guts had morphed into unrecognizable masses of brutality. Will bent over as he fought against the impulse to throw up. What on earth was going on at the vineyard, he wondered? Why would anyone murder those poor creatures without intending to eat or sell the meat? An invisible cow groaned its dissatisfaction with the situation as though hearing Will’s thoughts.

Will sensed movement toward the back of the shed, so he took a few steps closer to investigate. Yes, there was definitely something moving amid the piles of rotting flesh. He held his torch high above his head and noticed a bull’s horns moving ever so slightly in the back right corner. With his heart racing, he moved closer. When he was only a few yards away, he gained a view of the moving thing. It was a bull lying in the corner and it was in a dire state. One of its legs had been hacked off, and there were deep wounds all over its body. It was bleeding everywhere and groaning at the intense pain it was clearly in. Will lost his breath for a moment as he digested the poor animal’s state. He ran though all his options to help the beast. He could call out an emergency vet. He could attempt to dress the animal’s horrific wounds himself. Or he could awaken Stieg and demand his help and an explanation for this barbaric behaviour while he was at it. He decided to call the police first as this was beyond animal cruelty—Stieg was clearly beyond coherent thought.

As Will pulled his phone out of his backpack, he heard the front door creaking. He turned around to check if anyone was there, but the door swung of its own accord in the breeze. He turned back to the injured bull, and resumed dialling the police. As he did, a whoosh of wind came rushing inside and the front door slammed shut. Will jumped up, his body tense and alert. He jerked around and shone his torch around the front of the shed. He could have sworn he saw something moving, but his torch shook in his hand causing the light to vibrate. But there it was, something was running toward him!

He used his other hand to steady his shaking hand and soon had the light focused on whatever was in the shed with him. The first thing he noticed was a pair of bull horns closing in on him fast! He screamed. The idea of a bull gouging him had always been a fear of his, and there it was manifesting in reality. However, as he stared in disbelief it became apparent it wasn’t a bull running at him. It was a man wearing a bull’s head!

The bull-man lowered his head in preparation to gouge Will’s upper body with his long sharp horns. Will jumped to the left as the madman ran past him. However, the bull-man quickly pivoted and redirected his sharp horns at Will’s midriff. Once again, Will tried to jump out of the way, but this time the bull-man correctly anticipated his movements. The bull-man’s horns captured Will around his neck, forced him backward and pinned him to the bloody floor. For a moment, the two of them remained motionless as the bull-man’s horns had penetrated the dirt and couldn’t be moved. He was trying to detach them from the dirt like a wild animal, which meant he was about to gouge again.

“Stieg!” Will shouted. “I assume that’s you in there. Don’t do this. There’s no coming back from murder! You hear me?”

But Stieg, or the bull-man, or whoever the hell he was, didn’t appear to have heard. He just snorted like an angry bull and lifted his horns out of the ground with a final pull. He then veered backward like a snake preparing to lunge. His horns were directed at Will’s chest, ready to stab.